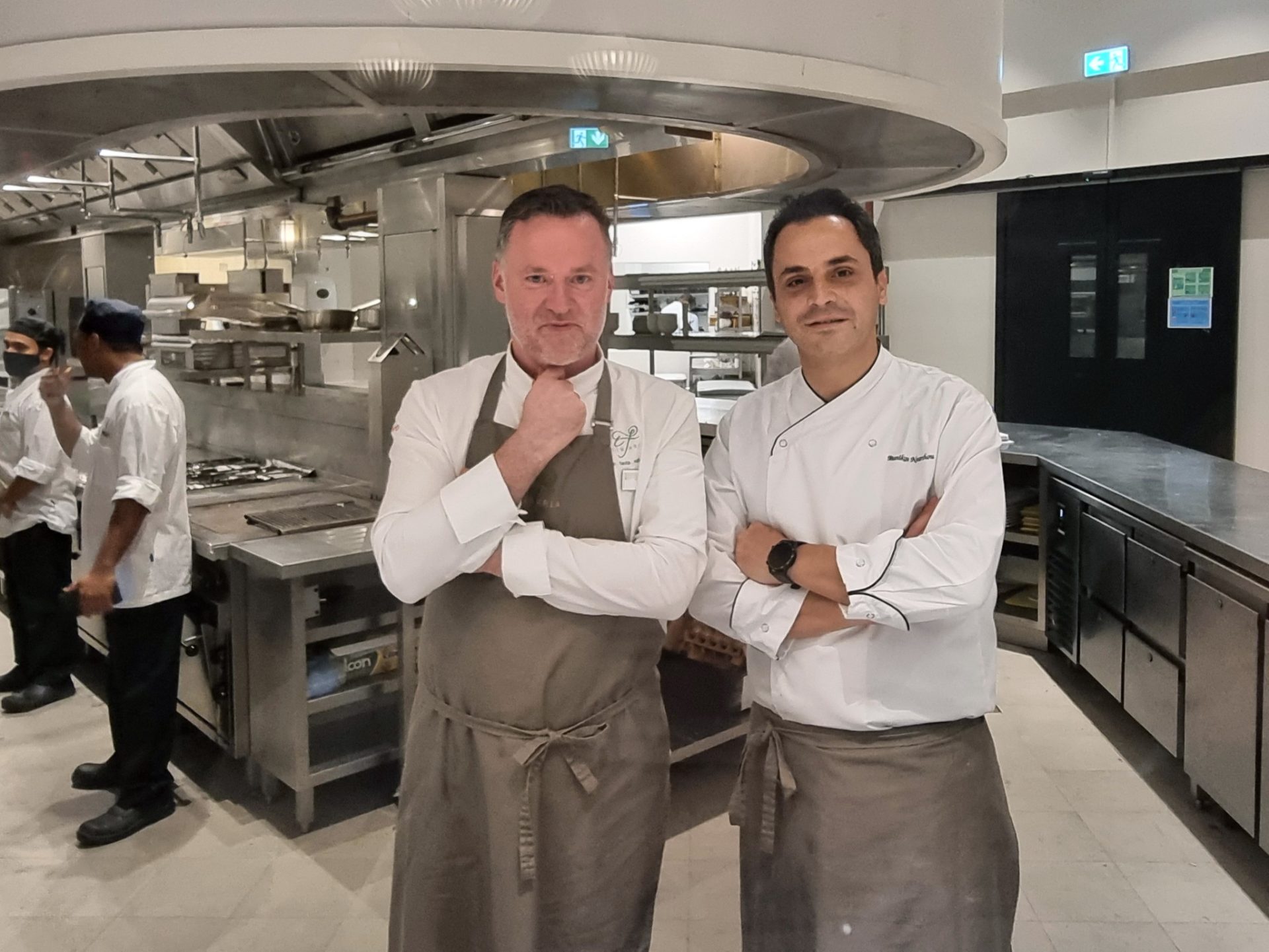 Our Hotels consultant Michellin Star Chef Theodor Falser received an invitation to the Atlantis Culinary Month in Dubai. Theodor Falser was there among other celebrity chefs to take centre stage cooking. In addition, our own Kanika Culinary Development Chef, Panikos Nearchou, was chosen to travel with him, as part of his team.

Atlantis, the Palm hotel hosts the Atlantis Culinary Month for the past four years. It showcases a wide range of food experiences, ideal for foodies. Specifically, the 2021 event included unique experiences from celebrity chef appearances to underwater dining. In fact, they invited Theodor among other celebrity Michelin star chefs, to create a 6-course menu for the White Restaurant. The event is one of the best food festivals in Dubai.

Panikos Nearchou, joined Theodor Falser at this international food festival, as his assistant. Additionally, they joined forces with Chef Ibrahim Ata for a unique four hands dinner. For two nights only, diners could enjoy a six-course set menu with each dish paying homage to nature. They used only hand-picked ingredients and locally sourced produce. The main aim was to create delicious food. Led by Michelin star chef Theodor Falser, diners had the opportunity to taste delightful dishes. Some of their creations included freshly baked farmer bread with linseeds and a superb risotto with stinging nettle. In addition, a honey-glazed roasted duck breast dish and a carrot butter poached turbot fillet plated with carrots, forest garlic, and puntarella. Last but not least, a brown butter rye-bread ice cream. In other words, just amazing food!

A Unique Culinary Experience for the Kanika Culinary Team

Specifically, during their stay in Dubai, the two chefs had the opportunity to enjoy the hotel cuisine. As special guests, as well as by getting an insight of behind the scenes. Together, they took charge of the kitchen by creating the menu for two days. In the end, upon his return, Panikos Nearchou stated:

To begin with, Theodor Falser is a world-renowned culinary icon with over 30 years of experience in creating superb dishes. A Michelin Star Chef with a host of accolades to his name. Theodor worked closely with Kanika Culinary Team for years. Particularly, Theodor has worked with our excellent team of chefs to create epicurean tastes. The collaboration began in 2018 with Theodor Falser as a consultant for the Amavi | MadeForTwo Hotels in Paphos. At the Amavi, he designed the menus for two of the restaurants. Immenso with Asian and Peruvian cuisine and the Nocturne with Meditteranean cuisine. Also, these menus will apply to the new Amanti | MadeForTwo Hotels in Ayia Napa, as well.

Plans for the future

“Creating the dining menus of yet more restaurants for Kanika Hotels & Resorts in Cyprus is a sign of our successful collaboration. Guests will be pleasantly surprised with the new menus of the Seven Orchids and Garibaldi restaurants.”

What comes to mind when you think of the perfect b

Spend your days relaxing in our overflow pool. Sun

Valentine's day is just around the corner, and our

Experience a uniquely intimate holiday with us at

You, your loved one and the sea! Discover #AyiaNap

New Ayia Napa Restaurants you Have to Tr...

Once the summer sizzle sets in, there are few places better to live out the drea …

Leisure travel in Cyprus: Where Relaxation and Adventure Blissfully Combine

Leisure travel in Cyprus: Where Relaxati...

Located on one of the most romantic beachfront spots on the island, famed for breathtaking sea and sunset views, this five-star couples-only getaway is a paradise of romance and relaxation Made For Two, where togetherness comes first.

Located in cosmopolitan Ayia Napa, this couples-only getaway is a paradise of romance and relaxation, strikes a balance between sophisticated luxury and casual seaside fun whilst providing the absolute best, custom-designed services and experiences for couples.

The ultimate all-included five-star haven in the heart of Agia Napa, renowned for its lush, landscaped gardens, beside the powdery sands of a Blue Flag beach. The resort combines the best of bespoke entertainment, leisure activities and luxury services.

From Per Person Per Night on Bed & Breakfast

This website uses cookies to improve your experience while you navigate through the website. Out of these, the cookies that are categorized as necessary are stored on your browser as they are essential for the working of basic functionalities of the website. We also use third-party cookies that help us analyze and understand how you use this website. These cookies will be stored in your browser only with your consent. You also have the option to opt-out of these cookies. But opting out of some of these cookies may affect your browsing experience.
Necessary Always Enabled
Necessary cookies are absolutely essential for the website to function properly. These cookies ensure basic functionalities and security features of the website, anonymously.
Functional
Functional cookies help to perform certain functionalities like sharing the content of the website on social media platforms, collect feedbacks, and other third-party features.
Performance
Performance cookies are used to understand and analyze the key performance indexes of the website which helps in delivering a better user experience for the visitors.
Analytics
Analytical cookies are used to understand how visitors interact with the website. These cookies help provide information on metrics the number of visitors, bounce rate, traffic source, etc.
Advertisement
Advertisement cookies are used to provide visitors with relevant ads and marketing campaigns. These cookies track visitors across websites and collect information to provide customized ads.
Others
Other uncategorized cookies are those that are being analyzed and have not been classified into a category as yet.
SAVE & ACCEPT
Select Hotel or Resort Thu, 30/06/22 Thu, 07/07/22 Check Availability